A Gazebo Never Forgets is the fifteenth episode of the third season and the eighty-ninth series episode of Bewitched. The episode was completed by October 19, 1966.

After Darrin and Samantha apply for a bank loan for home improvements, a nosy bank loan investigator named Hawkins comes snooping around the Stephens' home only to see a pink polka-dotted elephant that Aunt Clara mistakenly conjured for Tabatha.

This gallery is under construction. Expect frequent changes. 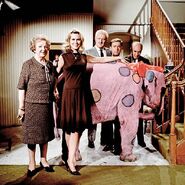 Add a photo to this gallery

Retrieved from "https://bewitched.fandom.com/wiki/A_Gazebo_Never_Forgets?oldid=21669"
Community content is available under CC-BY-SA unless otherwise noted.