View source
watch 01:36
We're Getting Mutants in the MCU - The Loop
Do you like this video?
Play Sound

Samantha and Darrin have plans to go out with the Tates. Aunt Clara agrees to babysit Tabatha. Larry and Louise ask if Aunt Clara can also babysit their son Jonathan. Samantha feels she has no other choice but to say yes. Aunt Clara decides to use witchcraft to amuse the children, but instead of creating a toy pony as was her intention, she creates a second Jonathan, identical to the first.

By the time Samantha and Darrin return home with the Tates, Aunt Clara has not resolved the situation, as she cannot remember the incantation she used, but what is worse is she cannot remember which baby is the real Jonathan. Samantha tries to stall the Tates from leaving with "a Jonathan" while a flustered Aunt Clara works to reverse her spell. Complications ensue when each Tate parent, separated in the house, gets a hold of one of the baby Jonathans. 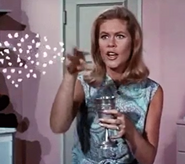 Larry and Louise finally reunite with Jonathan after a game of "musical birthday parties".