Baby's First Paragraph is the twenty-sixth episode of the second season, and the sixty-second aired episode, of Bewitched. The episode was completed by January 21, 1966.

Tired of hearing how smart Gladys' baby nephew is, Endora uses witchcraft to make the infant Tabatha speak fluently. The speech makes its way into the national news thanks to Gladys' big mouth. 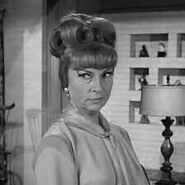 Endora has had it with Mrs. Kravitz
Add a photo to this gallery

Retrieved from "https://bewitched.fandom.com/wiki/Baby%27s_First_Paragraph?oldid=19236"
Community content is available under CC-BY-SA unless otherwise noted.