Bewitched is an American situation comedy originally broadcast for eight seasons on ABC from 1964 to 1972, starring Elizabeth Montgomery, Dick York (1964–1969), Dick Sargent (1969–1972), Agnes Moorehead and David White. It is about a witch who marries a mortal and tries to lead the life of a typical suburban housewife. Bewitched continues to be seen throughout the world in syndication and on DVD and was the longest running supernatural-themed sitcom of the 1960s–1970s era.

A young-looking witch named Samantha (Elizabeth Montgomery) meets and marries a mortal named Darrin Stephens (originally Dick York, later Dick Sargent). While Darrin wants Samantha to learn to live like a mortal and become a typical suburban housewife, her family disapproves of the mixed marriage and frequently interferes in the couple's lives. Episodes often begin with Darrin becoming the victim of a spell, the effects of which wreak havoc with mortals such as his boss, clients, parents, and neighbors. By the epilogue, however, Darrin and Samantha most often embrace and confound the devious elements that failed to separate them.

Witches and warlocks are very long-lived; while Samantha appears to be in her twenties, many episodes suggest she is actually hundreds of years old. To keep their society secret, witches avoid showing their powers in front of mortals other than Darrin. Nevertheless, the perplexing unexplainable effects of their spells and Samantha's attempts to hide their supernatural origin from mortals drive the plot of most episodes. Witches and warlocks usually use physical gestures along with their magical spells, and sometimes spoken incantations. Most notably, Samantha often "twitches" her nose to perform a spell. Modest but effective special visual effects are accompanied by music to highlight the magic.

Two of the film antecedents for this series were the 1942 film I Married a Witch (from Thorne Smith's unfinished novel The Passionate Witch and Me), and the John Van Druten play that was eventually adapted as Bell, Book and Candle (1958).

Sol Saks, who received credit as the creator of the show, wrote the pilot of Bewitched, although he was not involved with the show after the pilot. Initially, Danny Arnold, who helped develop the style and tone of the series as well as some of the supporting characters who did not appear in the pilot, like Larry Tate and the Kravitzes, produced and headed writing of the series. Arnold, who wrote on McHale's Navy and other shows, thought of Bewitched essentially as a romantic comedy about a mixed marriage; his episodes kept the magic element to a minimum, with one or two magical acts to drive the plot, but with Samantha usually solving problems without magic. Also, many of the first season's episodes were allegorical, using supernatural situations as clear metaphors for the real-life problems a young couple would face. Arnold stated that the two main themes of the series were the conflict between a powerful woman and a husband who cannot deal with that power, and the anger of the bride's mother at seeing her daughter marry beneath her. Though the show was a hit right from the beginning, finishing its first year as the number two show on television, ABC wanted more magic and more farcical plots, causing battles between Arnold and the network.

Arnold left the show after the first season (he would later co-create Barney Miller with Theodore J. Flicker), leaving producing duties to his friend Jerry Davis, who had already produced some of the first season's episodes (though Arnold was still supervising the writing). The second season was produced by Davis and with Bernard Slade as head writer, with mistaken identity and farce becoming a more prevalent element, but still included a number of more low-key episodes where the magic element was not front and center.

With the third season and the switch to color, Davis left the show, and was replaced as producer by William Froug. Slade also left after the second season (he would later create another popular Screen Gems series, The Partridge Family, which, like Bewitched, went through a recasting of a role). According to William Froug's autobiography, William Asher (who had directed many episodes) wanted to take over as producer when Jerry Davis left, but the production company was not yet ready to approve the idea. Froug, a former producer of Gilligan's Island, was brought in as a compromise. By his own admission, Froug was not very familiar with Bewitched and found himself in the uncomfortable position of being the official producer even though Asher was making most of the creative decisions. After a year, Froug left the show, and Asher took over as full-time producer of the series for the rest of its run.

Along with Darrin being played by Dick Sargent, the sixth season (1969–1970) also saw a significant decline in ratings. Viewership continued to dwindle in the seventh season. In the fall of the show's eighth season, which would be its last, ABC moved Bewitched's air time from Thursdays at 8:30 to Wednesdays at 8:00. The schedule change did not help ratings as the show was now pitted against CBS's popular The Carol Burnett Show. In January of 1972 the show was finally moved to the Saturday night death slot at 8:00, opposite television's number one show, All in the Family, and finished the year in seventy-second place. 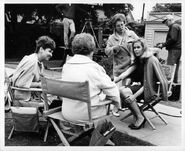 Sandra Gould, Marion Lorne and Elizabeth Montgomery on location at the ranch

Elizabeth Montgomery on set with Julie Newmar in the season eight episode, "The Eight-Year Itch Witch" 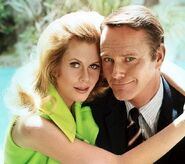 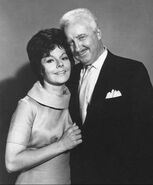 Elizabeth Montgomery, Erin Murphy and Agnes Moorehead in a Halloween promotional photo, circa 1967 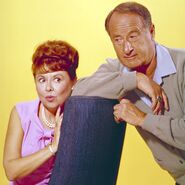 This concept may have been based on Glinda from The Wizard of Oz (mentioned many times in the series) but also it could have been invented either intentionally or coincidently two years earlier in 1964 by the first comic book appearance of Sabrina the Teenage Witch along with her Aunt Hilda (her other Aunt Zelda did not appear until 1968). Later media has used this as well such as Once Upon a Time with some characters using magic named Regina, Cora, Zelena, and Emma.