Darrin makes Samantha, who was performing her duties as Queen, end a royal session early. Endora and her friends enlist Serena's help to seek revenge. Serena tries to pass herself off as Samantha and drive him away. 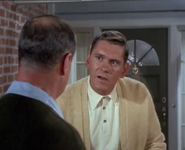 Endora got the pie Darrin meant to throw at Samantha.