Start a Wiki
Erin Murphy played Tabitha Stephens in the third through the eighth seasons of Bewitched (1966-1972). She shared the role with her fraternal twin sister, Diane Murphy in seasons three through five (1966-1968).

Erin Murphy was born on June 17, 1964 in Encino, California as Erin Margaret Murphy. She is an actress, known for Bewitched (1964), Deadly Fighters (1979) and Lassie (1954). She has been married to Darren Dunckel since May 1998. She was previously married to Eric Eden and Terry Rogers. She has six sons.[2]

I began my acting career at eleven months old and I'm best known for playing "Tabitha" on the hit 60’s/70's sitcom: Bewitched.

I started filming June 16, 1966 the day before my second birthday. That episode (Nobody's Perfect), the season three premier and the first in color, originally aired September 15, 1966. My role continued for the following six seasons, and I feel lucky for being a part of such an enduring show.

Following Bewitched, I didn’t lose my love for the business and was able to balance a successful career with a normal childhood. I modeled and have appeared in over one-hundred commercials.

As an adult, I have worked as a casting director, a makeup artist, a fashion stylist, an acting teacher, Karaoke club hostess, a motivational speaker and even as a stunt double. Currently I work as an actress, television host and correspondent.

I have a passion for fitness, fashion, cooking, sailing, horseback riding and animals. I enjoy the occasional snow day, but I'm happiest on a sunny beach.

I am very active in the community, and have been president of the Junior Women’s Club, and a member of my City Council Leadership Program. I have been donating blood since I turned eighteen, and I'm actively involved with several children's charities and special needs organizations.[3] 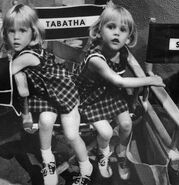 Erin and Diane on set
Add a photo to this gallery

Retrieved from "https://bewitched.fandom.com/wiki/Erin_Murphy?oldid=12178"
Community content is available under CC-BY-SA unless otherwise noted.

Fandom may earn an affiliate commission on sales made from links on this page.

Fandom may earn an affiliate commission on sales made from links on this page.