Playmates is the twenty-sixth episode of the fourth season and the 133rd series episode of Bewitched. The episode was completed by January 18, 1968.

Samantha's mother-in-law introduces Samantha and Tabatha to old friends of hers. Unfortunately, the mother is too lenient with her son and he acts like a bully. Tabatha turns him into a bulldog.

Phyllis tells Samantha she is an over protective mother.

Tabatha casts a spell to get the shovel back from Michael. 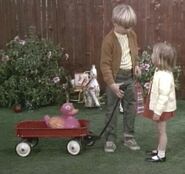 Samantha and Gretchen have some coffee while their children play.

Michael wants to be a dog so he can "bite Tabatha to pieces".

Tabatha grants his wish and turns him into a bulldog.

Michael tells his disbelieving mother he was a dog.
Add a photo to this gallery

Retrieved from "https://bewitched.fandom.com/wiki/Playmates?oldid=21691"
Community content is available under CC-BY-SA unless otherwise noted.