Asher was married to series star, Elizabeth Montgomery, and together they created eight magical years on television.

William Milton Asher was an American television and film producer, film director and screenwriter. He was one of the most prolific early television directors, producing or directing over two dozen series.

With television in its infancy, Asher introduced the sitcom Our Miss Brooks (starring Eve Arden), which was adapted from a radio show. He began directing I Love Lucy by 1952. In 1964, he produced and directed Bewitched, which starred his then-wife Elizabeth Montgomery. As a result of his early success, Asher was considered an "early wunderkind of TV-land", and was hyperbolically credited in one magazine article with "inventing" the sitcom.

Asher was nominated for an Emmy four times, winning once for directing Bewitched in 1966. He was also nominated for the Directors Guild of America (DGA) award in 1951 for I Love Lucy.

Asher was first married in 1951 to Danny Sue Nolan, with whom he had two children. The couple divorced in 1961. Asher then married Bewitched star Elizabeth Montgomery in 1963. They had three children and divorced in 1973 (soon after the series ended). His third marriage was to Joyce Bulifant from 1976–1993. He adopted her son, actor, John Mallory Asher. This marriage also ended in divorce. In his last years, Asher resided in Palm Desert, California, with his fourth and final wife, Meredith Asher. 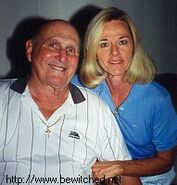 Asher with his fourth wife, Meredith 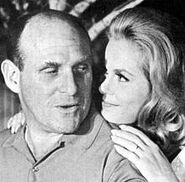 Add a photo to this gallery

Retrieved from "https://bewitched.fandom.com/wiki/William_Asher?oldid=19429"
Community content is available under CC-BY-SA unless otherwise noted.